Embark on this memorable journey covering the beautiful North Eastern part of our beautiful country, India.

Don't ride a bike? No worries, choose our SUV option and travel comfortably!

What are you waiting for? Scroll down for more information :)

Day 6: Gangtok to Nathula and Zuluk

After reaching the Siliguri airport, meet your trip captain, finish documentation and start riding to Gangtok. On the way, stop for rafting (if weather permits) Enjoy the first day of your scenic ride. Reach the hotel. Overnight stay and dinner at the hotel.

Start riding to Lachen. Lachen is a town in the North district in the Indian state of Sikkim. It is located at an elevation of 2750 meters. The name Lachen means “ Big Pass”. On the way to Lachen, enjoy the scenic and breathtaking view. Overnight stay and dinner at Lachen homestay

Post breakfast, start riding to Gangtok. Visit Yumthang Valley of flowers sanctuary which is a nature sanctuary with the river, hot spring, yaks and grazing pasture. Zero-point situated at an altitude of 15300 feet is very close to the China Border. Then ride to Gangtok. Overnight stay and dinner at the hotel in Gangtok.

Transit for Tsomgo Lake, Baba Mandir, Nathula Pass. Baba Harbhajan Singh temple is popularly known as Baba Mandir and Nathula is a mountain pass in East Sikkim. This is the three open trading border posts between China and India at an elevation of 4,310 meters. Then ride to  Zuluk. Overnight stay and dinner at Zuluk.

Zuluk at a height of around 10,000 ft lies in East Sikkim. After breakfast, start riding to Siliguri. On the way, enjoy silk route beauty in Sikkim. After reaching Siliguri, get dropped at the airport for your flight. Depart with memories galore!

Sikkim is a North-Eastern state of India bordered by Bhutan, Tibet, and Nepal. Sikkim is divided into 4 districts as North Sikkim, East Sikkim, West Sikkim, and South Sikkim. Here, I am starting with North Sikkim.

If Tsomgo Lake, Gangtok and Nathula pass is the only place you have heard about, then buddy let’s take you for a ride. Here are the top 8 places to visit in Sikkim.

Gangtok is the capital of Sikkim and the largest town as well. Situated at an elevation of 1,650 meters (5,410 ft), it is the center of Sikkim’s tourism industry. It was once an important transit point for traders traveling between India and Tibet. Descending the hillside in steep tiers and providing a spectacular view of the Khangchendzonga, Gangtok acts as a perfect base for tourists traveling to various other parts of Sikkim.

Once you reach Bagdogra Airport, you can hire a bike/car to Gangtok or you can book a package from Deyor Camps for a hassle-free trip. It's around 120 km from Siliguri which will take 3 hours approximately.

Things to do in Gangtok

The months of March, April, May, October, November, and December are the best time to visit Gangtok. These are the months that will suit the majority of the Riders. The temperature here ranges from an average maximum of 22 °C (72 °F) in summer to an average minimum of 4 °C (39 °F) in winter.

This lake is situated at a height of 12,400 ft. from the sea level. It is around 30 km from Gangtok. For the overwhelming scenery of this lake, it becomes a favorite destination for riders. The beautiful lake is frozen during winters. You may find snow all around and have some unforgettable moments in the snow. If you are lucky, you can see strawberry trees on the way and pick some yourself as well. You will find tea points and Maggi points while on the way.

“Lachen”, in local language it means ‘Big Pass’. It is situated at a height of 8,838 feet above sea level. It will take around 6-7 hours to ride up to this place from Gangtok. Expect a rollercoaster ride through the bumpy roads. From Chungthang Valley, the road splits into two directions. The road on the left leads to the city, which is about 26 Km from Chungthang.

This lake is located at a height of 17,100 feet above sea level. It is one of the highest lakes in the world. It is also the second-highest lake in Sikkim. The lake has an area of 118 hectares and its peripheral length is 5.34 Kms.

The best time to visit the Lake is from March to June and October to December. You can expect temperatures between -2 degrees to 0 degrees during this season. If you want to do something Tufani and to see the lake along with the surroundings beautifully frozen then the early weeks of December are ideal for you to visit. The temperature can go down to -8 degrees to -10 degrees in the day.

This Lake is around 64 km from Lachen and the distance from Gangtok to Lachen is around 121 Km. Since there is no proper accommodation facility available after Lachen, on the way to Gurudongmar Lake. Therefore you’ll have to spend the night in the hotels or homestays of Lachen.

The journey to Gurudongmar begins early in the morning. The weather conditions around the lake are most favorable in the first half of the day and worsen in the second half.

It is located at a distance of 120 Km from Gangtok and 135 Kms from Lachen. its height is around 8,610 ft above sea level. The town is one of the favorite destinations for riders who plan to go to places like Katao Valley, Zero Point and Yumthang Valley in North Sikkim.

It will take you 6-8 hours to reach Lachung from Gangtok. It is a wise idea to get in touch with highly experienced travel partners like Deyor Camps before booking a trip to Lachung. Lachung is less cold in comparison to Lachen. There are quite a few restaurants in Lachung that serve Thukpa which is a very famous dish there. It is a kind of delicious mixed Meat Noodle soup.

The best time to visit Lachung would be from March to June and October to December. The weather is as pleasant as it could be during these months and you will experience clear visibility of mountain ranges.

The Yumthang Valley name brings one thing in mind, Flowers. ‘Yumthang Valley’ or you can call it “Valley of flowers’. This beautiful valley is Situated 11,800 feet above sea level.

It is around 26 km from Lachung. The closest town from Yumthang is the charming village of Lachung. You’ll have to take a stopover at Lachung because after that proper accommodations are not available.

March to June & Oct to Dec.

Located at an altitude of 14450ft and 58kms from Gangtok, the Nathula Pass is not only a popular spot for riders because of its natural beauty, but also because it is enriched in history. The Pass is an offshoot of the Old Silk Route, connecting Sikkim to the Tibetan Autonomous Region. The distance between Lachung and Nathula is 162 Kms. The only way to reach the pass is through a ride from Gangtok. Vehicles Like Car/Bike are available for rent in Gangtok. If you are traveling with Deyor Camps then you’ll get the best services here. The road from Gangtok to Nathula pass will be rising and falling sharply and sometimes it becomes slippery too. Although most of the roads are decently maintained, except in a few places. Riding on these roads can be your lifetime experience. We suggest you keep a Nathula Pass map while driving to the pass because you’ll not get a proper network there, so you won’t be able to access Google maps also. Be ready for challenging terrain.

The temperature at Nathula Pass drops as low -25 ° C during winters and the minimum temperature during the summers( March to June ) will be approximately 10 ° C. The Best time to go there is March to June and Oct to Dec. You can contact Deyor Camps for fixed departures for a bike trip.

It remains closed on Monday and Tuesday. Visiting days are Wednesday to Sunday.

How To Get Nathula Pass Permit?

It is produced by the Sikkim Tourism Department in Gangtok. If you are traveling with Deyor Camps then you don’t have to worry about anything. You’ll get your permits done.

All you need to do is to submit a photo ID proof along with two passport-sized photographs. Children below 4 years are not allowed officially. Only Indians with a valid permit are allowed to visit Nathula Pass.

Sightseeing In and Around Nathula

The Himalaya here is breathtakingly beautiful. The Alpine forests, the snow-capped mountains, the winding roads and the history surrounding it will give you sheer chills - literally too. There is a famous temple named Baba Harbhajan Singh Mandir which is a place of great importance in terms of tourism and is strategically located on the Indo-China border. Harbhajan Singh was an Indian Army workforce.

It is approximately 178 km from Gangtok and 162 km from Lachung. You’ll have to take a halt at Zuluk after crossing Nathula pass.

Zuluk is a small village located at an altitude of about 10,000 Feet on the craggy terrain of the lower Himalayas in East Sikkim. Around 700 people are residing at Zuluk. The main attraction of Zuluk is its eye-catching zig-zag Path which is called Zuluk Loop. From the Thambi viewpoint, you can have a bird's eye view of Zuluk. This is the ideal place of watching sunrise and sunset over the world's third-highest mountain Mt. Kanchenjunga

Zuluk’s weather is pleasant most of the year. Of course, since it is situated at high altitude, winters are comparatively cold. The benefit of visiting Zuluk during the winter season is that you can see the loops covered with snow. But we don’t suggest you travel there in winter because that route becomes scary because of heavy snowfall and roads would also be blocked.

However, season time is March to June and October to December.

The distance between Gangtok and Zuluk is 90 km. From Lachung it is around 164 Kms. It will take about 3 hours to reach here from Gangtok.

Permits are mandatory for everyone either Indian or foreigner (Requirements for permits are mentioned below). This is because Sikkim is a border state that shares its boundaries with 2 other countries.

Original Documents required for the whole trip that you need to keep with you while applying for North Sikkim and East Sikkim Permit are: 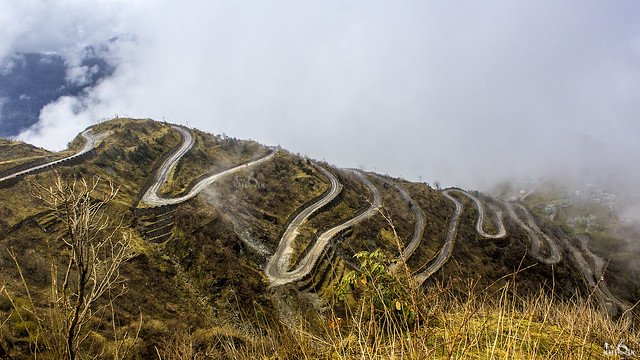 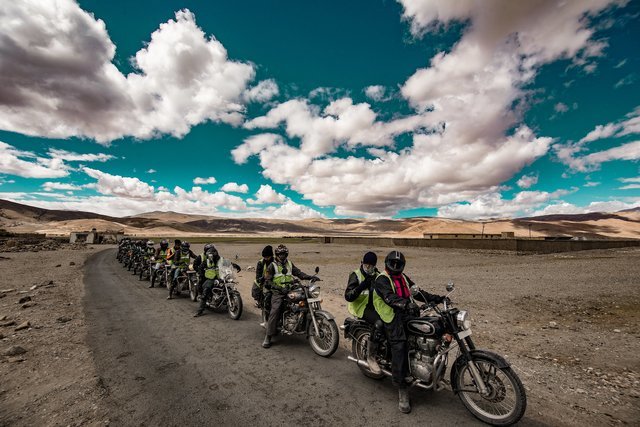