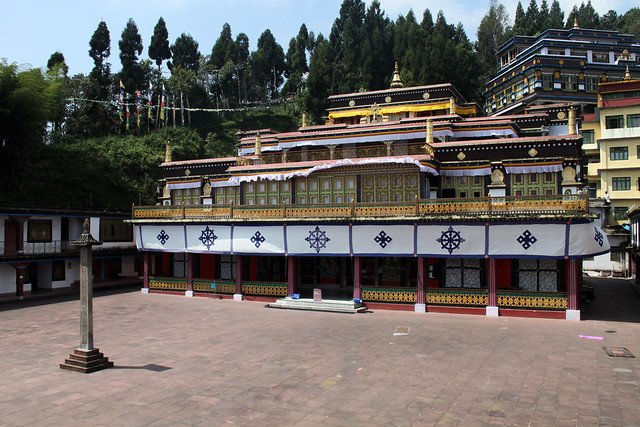 Set out on this bike trip through the famous stretches. Start with a ride from  Siliguri to Gangtok, while confronting the evolving climate at first damp  quickly cold.

∙ From Lachung head towards the Zero Point the last out post of development  of India on the Indo-China Border and furthermore stop at Yumthang Valley  the wonderful Valley of Flowers of Sikkim. .

∙ When in Lachen The Gurudongmar Lake hangs tight for you to get lowered in  its excellence. Invest some quality energy here and afterward head to your  Hotel and Check Out from that point.

∙ Relish a rest day at Gangtok and restore the licenses for a visit towards  Eastern Sikkim. Investigate the Local Market all alone and shop trinkets. ∙ Three step dance through the clasp twists of Zuluk, ride across Nathula Pass  and arrive at Padamchen, a town in the lower region slants of Himalayas.

Report to the sprawling city of Siliguri which is our gateway to Sikkim.Gangtok marks our first  stopover. With amazing roads the panoramic scenery adds to the toast. It won’t take long for River  Teesta to join along as we leave the foothills of Siliguri. The snaky roads as patented by any  mountainous region will make its way to a city which isn’t just litter free but a spit free zone too (It  exists and “in” India!). Won’t that be a wonderful experience to stay in the cleanest city of India. Stay  and dinner at the hotel.

After breakfast start for Lachen covering the on route sightseeing. On the way, take a break for some  beautiful spots like Singhik View Point, Naga Waterfalls, The Confluence of Lachen Chu (River) &  Lachung Chu (River) at Chungthang and Bhim Nala Waterfall. One gets to witness the dove white  Kanchendzonga (Kanchenjunga) soaring into the sky. On arrival, stay and dinner at the hotel .

Early morning after breakfast drive to Gurudongmar Lake- Gurudongmar Lake, is one of the highest  lakes in the world and highest lakes in India, located at an altitude of 17,800 ft (5,430 m) in the Indian  state of Sikkim. While the drive embraces the beauty of Thangu Valley on the way and reaches  Gurudongmar, it is a lake which is considered sacred by Buddhists, Sikhs and Hindus. The lake is  named after Guru Padmasambhava, also known as Guru Rinpoche. Back to the Hotel. After lunch,  drive to Lachung. Arrive by evening. Overnight stay and dinner at Lachung.

Sikkim is a land with wonders of valleys, lakes, high mountain passes, snow capped mountains,  waterfalls, hot springs, meandering roads, tea gardens and the list never ends. As we start our  today’s journey after breakfast we enter the valley of flowers. Yumthang Valley is a paradise which  tucks in a wide variety of rhododendron flowers and is thus named aptly. We ride through the valley to  make our way to Gangtok. En route we halt at Zero Point. We halt because there is no road further.  Not far away from this point, China begins and one can easily see Chinese bunkers and men around.  And that’s how we peeked in international borders too. Stay and dinner in Gangtok.

Mountain biking is incomplete until the meandrous roads spin off the head and the bike doesn't  thunder around any mountain passes. Riding through the roads once marched upon by traders is as  silky as its name (Silk Route). After breakfast, it begins with a narrow road with right, left, right, left  turn. With 56 hairpin bends, Zuluk hands down is every rider’s utopia. Thambi view point gives a  complete view of the loops.f We continue riding through quaint villages like Gnathang, Kupup and  pass by numerous lakes until we scale high to Nathula pass. At 14,140ft the pass shows the mountain  covers in foreign lands. Stay and Dinner in a hotel.

We rode across the adventurous North and East Sikkim. Now we embark on our journey back to the  plains of Siliguri After Breakfast . Enroute we will cover some famous destinations of East Sikkim like

Aritar, Padamchen and Rorathang. Arrive at Siliguri by the evening. Explore the town of Siliguri for the  last time. Overnight stay and dinner will be at Siliguri Hotel

After Breakfast. We start our journey towards Darjelling.

Explore market on your own.Dinner & overnight stay in Darjelling.

After breakfast depart for siliguri Airport