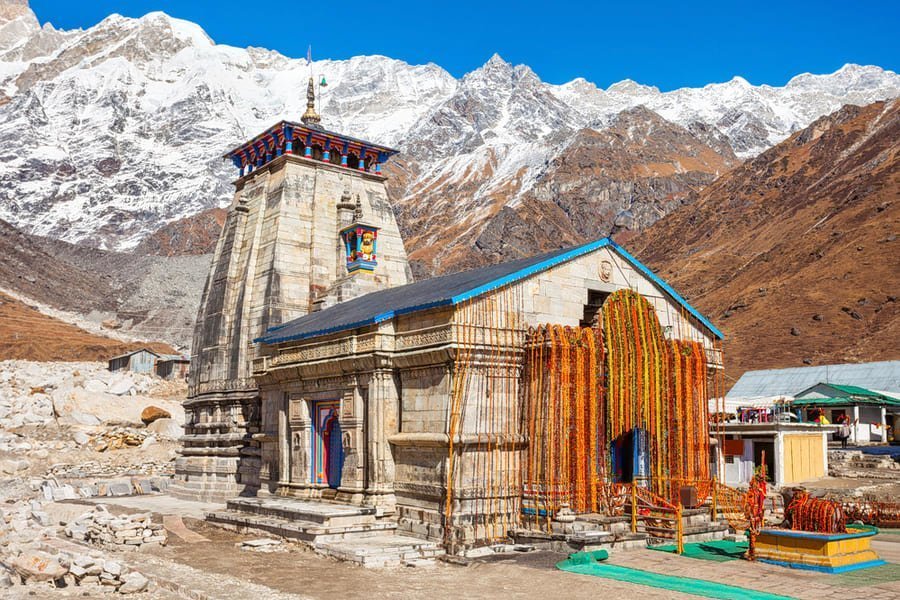 Uttarakhand, also known as Devbhoomi or the Land of Gods, is home to numerous temples and welcomes devotees all year round. Among the countless religious sites and circuits that devotees visit in Uttarakhand, one of the most prominent is the Char Dham Yatra. This Yatra or pilgrimage is a tour of four holy sites - Yamunotri, Gangotri, Kedarnath and Badrinath – nestled high up in the Himalayas. In Hindi, 'char' means four and 'dham' refers to religious destinations.

The high-altitude shrines remain shut for around six months every year, opening in summers (April or May) and closing with the onset of winter (October or November). It is believed that one should complete the Char Dham Yatra in a clockwise direction. Hence, the pilgrimage starts from Yamunotri, proceeds towards Gangotri, onto Kedarnath, and finally ends at Badrinath. The journey can be completed by road or by air (helicopter services are available). Some devotees even do a Do Dham Yatra or a pilgrimage to two shrines - Kedarnath and Badrinath.

- Accommodation on Triple Sharing basis for 9N.
- Sedan Vehicle for transfers according to the itinerary.
- MAP Meal Plan
- All hotel taxes and parking charges.

Day 0) Start From Delhi | Pickup | Overnight Journey
Tonight commences the start of your journey.
We will pick you up from the designated spot and shall proceed with an overnight journey towards Barkot.

Day 01)  Barkot
Our divine journey towards Chardham begins. Today we will halt at Barkot for the night. While on the way, we will be visiting Kempty Fall Mussoorie. Today our journey will be by the banks of river Yamuna towards Barkot. Reach Barkot by the latter half of the day. On arrival check into your stay and relax for the night.

Rise up and get ready to be served with divinity as today we will be visiting Yamunotri Dham. We will drive up till Jan Ki Chatti as from this point the trek starts. The trek to the temple of Goddess Yamunotri is a 6kms journey on one side and will take about 4hrs. On reaching the temple, bow your heads down to praise the mother Yamuna. Later, we will drive back to Barkot to stay overnight.

Day 03) Barkot – Uttarkashi
Get ready as we move ahead. Today we will drive towards Uttarkashi, the holy town of Uttarkashi is situated along the banks of river Bhagirathi and is one of the district capitals of Uttarakhand. On arrival check into your stay freshen up and rest for a while as today we will be doing local sightseeing and will visit Vishwanath temple and Shakti temple. Overnight at the hotel.

Today we worship Goddess Ganga for all she has given to earth and its beings by visiting Gangotri Dham, the holy shrine of Goddess Ganga. Through Harshil we will reach Gangotri. After aarti we drive to Uttarkashi for a night stay.
Day 05) Uttarkashi– Guptkashi

Early today we will start our journey towards Guptkashi. Following the hilly roads and serene views we will reach Guptkashi by the evening. On arrival check – in to the hotel and overnight stay.

Day 06) Guptkashi – Gaurikund - Kedarnath
Today after breakfast we embark on our forward journey towards Kedarnath. We will drive till Gaurikund from here the trek towards the holy Dham of Lord Shiva starts. It’s a journey of about 14kms and takes about 5 – 8hrs depending upon your fitness level. One also has the option of hiring Pony or Palki. On reaching the temple, praise the almighty Lord Shiva. After the temple visit stay overnight in the hotel provided at Kedarnath.

Day 07) Kedarnath - Gaurikund – Guptakashi
Post breakfast we will descend back to Gaurikund from where we will drive to Guptkashi. Check into the hotel at Guptkashi and overnight stay.

From Guptkashi it’s a drive of about 6hrs towards Joshimath On arrival check-in to your stay, freshen up and relax. Overnight stay.

Today we will drive to Badrinath , on arrival to visit the famous shrine of Lord Badri Vishal. You also have the option today to take a holy bath at the Tapt Kund and visit other places like Mana, Bhimkund, etc at an extra cost. Later, we will drive to Joshimath. Hotel check–in overnight stay.

Day 10) Joshimath to Haridwar to Delhi
Early today we will start our journey towards. Through the same old route we will drive by the scenic views and alas! greet a goodbye to the natural surrounding and holiness this place offered you with. We will drop you at Delhi via Haridwar, our journey ends here.