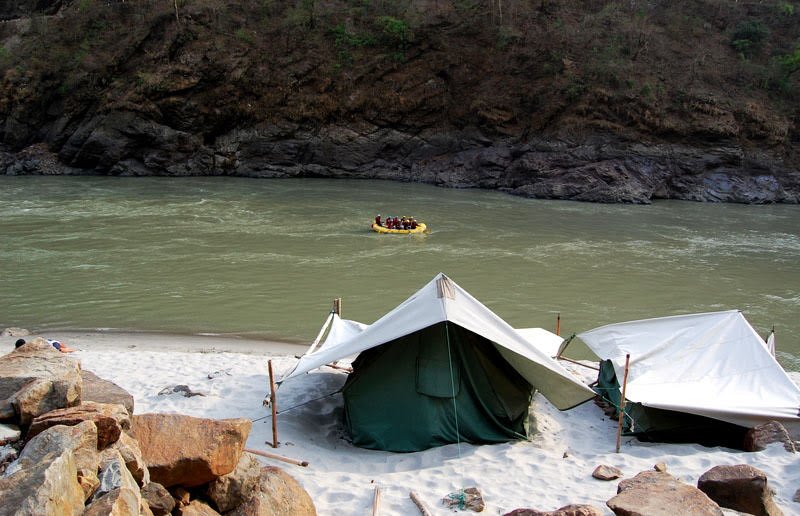 Rishikesh is located at the foothills of the Himalayas right along the banks of Ganga. Being one of the adventure capital of India this place provides you with experiences varying from riverside camping, rafting, bungee jumping, and many more.

Rishikesh is an aesthetically pleasing place to visit with the pristine blue Ganga, stark white river banks, dense green hills, and ancient temples. It is also known for the pilgrimage sites with a number of important temples of Hinduism located here and yoga, as it is also known as the ‘Yoga capital of the world’ being a prominent center to study yoga with many ashrams and meditation centers present, where people from all over the world come to study yoga.

Showing 2 of 2 experiences Sort by 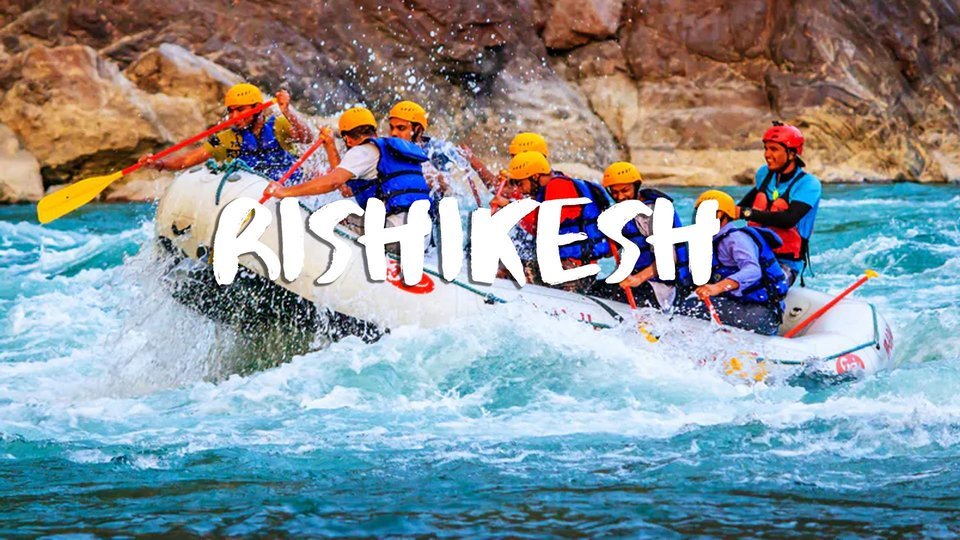 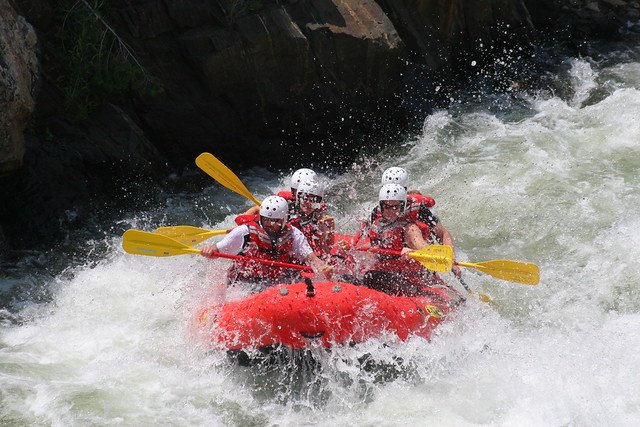 Things To Do In Rishikesh

The first city that Ganga flows through after descending the Himalayas is Rishikesh.It is situated in Tehri Garhwal district and is surrounded by the mountains of the Garhwal range of Himalayas. Rishikesh has multiple shades you can visit temples and watch Ganga aarti, you can learn yoga, and fill your soul with adventure by White water river rafting and bungee jumping

The camps located at the banks of the river allow a number of activities like river rafting, parasailing, paragliding, trekking, rock climbing, mountain biking, flying fox, body surfing, cliff jumping and kayaking just to name few. Considering the endless options riverside camping in Rishikesh is obviously the best place for an amazing holiday. These camps are well organized with the best facilities and tents to accommodate depending on your choice. One can either participate in the activities or stroll by the riverside and take in the beautiful views with the fresh air blowing. The camps are the best place to meet new people from all over the world as there are bonfires that take place every night where there are a lot of fun and games right under the moonlit sky.

Ganga river is mainly formed by two major rivers, Bhagirathi and Alaknanda. The river continues to hurtle down the Garhwal mountains until it reaches the outskirts of Rishikesh. To the west of Triveni ghat, Once joined by the Chandrabhagha river. The southern part of the town is the old part and its Traditionally called Rishikesh. It is right on the West Bank of the river to the south of the confluence of Chandrabhagha with Ganga. The south of the Confluence is the Triveni Ghat. Old Rishikesh is a Market place centered around the Triveni Ghat. Across the Chandrabhaga river and still on the West Bank of Ganga is the Township of Munni ki Reti. Going further to North We come to Ram Jhula Pedestrian bridge that Staddles the River. The east bank is Name as Swargashram.

Triveni Ghat is in old Rishikesh at the West Bank go Ganga river right to the south of where the Chandrabhagha river joins it. Every Evening at sunsets spectacular prayer performance for Aarti happens at this ghat,16 priests stand in a row at a pedestal right by the River and Hold up large banks lit with flames. As Chanting and Songs are played, the priests move the lamps in all four Directions as an offering to the river. You should reach at least 30 minutes Before the Aarti happens so you get Riverside seats. Summer Timing 6:30 pm and Winter Timing 5:30 pm

It is believed that the ghat was visited by Lord Krishna when he got hurt by the Arrow of Jara-a hunter. Being the most venerated Ghat in Rishikesh, Triveni Ghat is even used by Devotees to Perform the last rites and rituals of their loved ones. The Ghat is famed for the Ganga Aarti performed to the Chants of Vedic hymns.

The First Bridge, Ram Jhula, Starts from near the Swami Shivanand Ashram at Muni ki Reti on the West of the river and near Rameshwar Temple at Swargashram to the east of the river. The second bridge, Laxman Jhula, Starts at the slightly elevated Tapovan Locality and ends near Tryambakeshwar temple. There are many Hindu ashrams and religious centers established on both sides of the Ganges. This bridge is 2 km upwards of the river stream. This bridge is Constructed with a span of 750 feet

Being one of the most renowned river rafting destinations in north India, white water rafting in Rishikesh is a must-do for anyone wanted to take a big dip and get their adrenaline. Adrenaline junkies and Nature lovers, Strap on your life vests and helmet in order to paddle and bounce your way over turbulent rapids. Because sometimes it takes a little water to rekindle the fire in your life.

Brahmpuri Rafting Season: This is the basic stretch. The length of this stretch is 9 km and it mostly has grade II rapids. Rafting can be enjoyed here between mid-September and June-end.

Shivpuri Rafting Season: This 16 km long stretch mostly has grade III rapids, and is a recommended stretch. It opens soon after the Brahmpuri Stretch and is closed down around the beginning of June.

Marine Drive Rafting Season: This is a thrilling stretch with mostly grade IV rapids and is not a recommended one for the first-timers. This 25 km long stretch normally opens in simultaneity with Shivpuri Rafting Season but is closed down 1-2 weeks before it.

Kaudiyala Rafting Season: This is an advanced stretch and is definitely not recommended if you’re inexperienced, since it has grade V rapids, rafting at which is an extreme adventure. It has the shortest time window as it opens up in mid-October and closes down around mid-May.

Ever thought about flying like a bird? Bungee Jumping will surely help you do so. Bungee Jumping is an adventurous activity that is all about jumping from a place that is at a great height. While jumping you are connected with a cord that is properly attached to a surface or any object that can bear heavyweight. You can either jump for a cliff or from a plane and you will be completely safe. The venue for best bungee Jumping in Rishikesh is located in Mohanchatti with the name, Jumpin Heights. It is run by ex-army officers and the jumpmasters are from New Zealand, the Adventure Capital of the world. Jumpin Heights feature India’s highest bungee jumping in Rishikesh with a height of 83 meters. Jumpin Heights is open every day, except for Tuesdays.

Series of stairs that goes towards the east banks of river. This is a great spot to see the sunset.

Most popular ghats in Rishikesh and certainly most popular to the east of the river. The Ghat features a clock tower which is called the Shanti Stambh or peace tower. The prayer is performed on a concrete platform that just into the riverfront.

If you want to spend quiet dusk away from the constant chatter of people and honking of vehicles, this the ghat to be in.

The most special feature of this ghat, If you sit on the platform and hang your legs,then your feet will be in cool Himalayan water of the river.

Beatles Ashram, also known as Chaurasi Kutia, is an ashram close to the north Indian city of Rishikesh in the state of Uttarakhand. The ashram gained international attention between February and April 1968 when the English rock band the Beatles studied meditation there, along with celebrities such as Donovan, Mia Farrow and Mike Love. It was the setting for the band's most productive period as songwriters, where they composed most of the songs for their self-titled double album, also known as the "White Album".

The jade blue Neergarh waterfalls also known as ‘Neer Gaddu’ are located about 5 & 7s km from Lakshman Jhula (Neergarh Waterfall I & II) on Rishikesh-Badrinath highway. These natural waterfalls radiate their empyrean beauty as they tumble down the rocky cliffs. During summers many tourists visit Neergarh waterfalls to bathe in the cool water of the stream flowing nearby. There are two small bridges erected on the waterfalls having few resting shops in the vicinity. A short trek will take you closer to this pristine waterfall.

8.Camp on the riverside, under the stars

When the last time you slept under the star and cooked dinner over an open fire. Do it all in Rishikesh, with the perfect gorgeous mountain backdrop and white water river ideal for kayaking and rafting. The camps in Rishikesh, with neatly managed surroundings, panoramic views, and uninterrupted of valleys, makes for the ideal place to spend a day or two. These stays have basic facilities, offer good food and a wide range of activities that are perfectly curated to make your holidays engrossing. A camping stint in these places could be the best bargain for your weekend. Camping in Rishikesh is famous because of the availability of plenty of adventures and tourist places around. While you plan a trip with camping near Rishikesh there are a lot of activities and a day trips that you can plan to make the most out of your short vacay. River rafting, body surfing, cliff jumping, bonfire, in-house volleyball, and badminton are some of the most exciting things to do while planning rafting and camping in Rishikesh.